Turbo Island is a long-standing homeless encampment in Stokes Croft, Bristol. This week, archaeologists are leading homeless volunteers in the first excavation in the area. As The Beeb reports:

A team of homeless people are to begin excavating a derelict corner of Bristol which has been used by rough sleepers for more than 40 years... Archaeologist Rachael Kiddey, who developed the scheme, said: "This project seeks to break down barriers." Ms Kiddey and colleague John Schofield thought up the project after speaking to rough sleepers in the underpass.

Mr Schofield said a host of stories were attached to the traffic island including that it is the site of a bombed WWII building; that it was once a "Speaker's Corner"; and that it was "where pirates were hanged".

It's a joint venture of English Heritage, Bristol University, and, apparently, Marmite (!)

Archaeology has traditionally been used by the rich and powerful as a way of legitimating their tastes, interests and politics. There's been lots of theoretical discussions about "inclusive" and "multivocal" archaeology in the past 20 years, but very little work that is specifically designed to help local communities tell their stories. As Schofield observed,

Places that matter to homeless people and those who have a marginalised existence in society are significant in their own right.

I'd go further and say that places matter, period, and the point of archaeology is to tell stories about places. If we're not telling those stories with the consent and collaboration of the people who live there, we contribute directly to their disenfranchisement. Also (more cheerfully) people enjoy digging stuff and usually find archaeology pretty fun. Treasure hunting is part of human nature, and that impulse can be harnessed to all kinds of interesting projects like this.

I'm looking forward to the results of the dig! Here's some pictures of Turbo Island, looks like a cool spot. This one from the Bristol Graffiti blog: 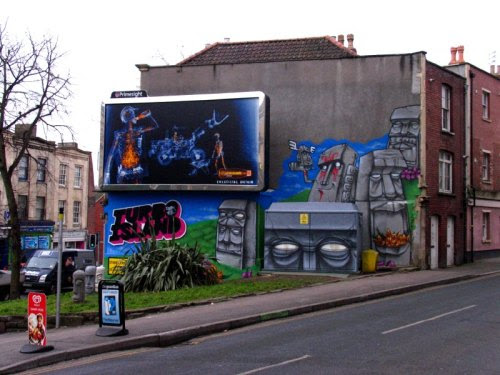 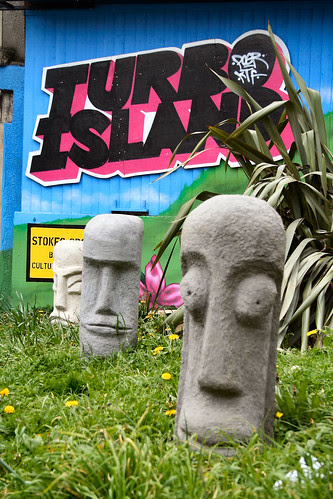 From Canis Major on Flickr. Love the tiny Moai! Apropos the photo Canis Major notes: "The small plot of land in Stokes Croft Bristol called Turbo Island apparently got it's name from a strong brand of cider that street drinkers who regularly met there used to favour. It has now become a focus for the area's urban artists. These Easter Island style heads being a recent addition." Mmm, some cheap strong cider sounds good right now.
Posted by Dan at 11:06 PM