Some of us have normal baby pictures. I have some like this: 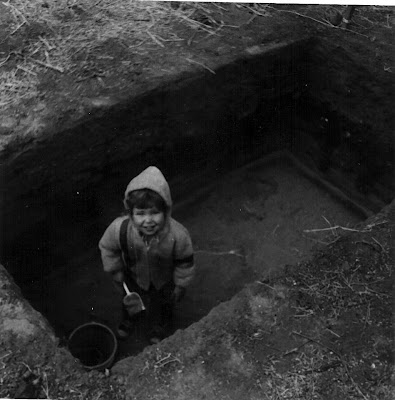 That's me at a tender age, plopped into a test excavation unit at Fort Mason, San Francisco, circa 1978. My mom was getting her CRM business started at the time and got the contract to do monitoring and Phase I excavations there. I remember her saying that the Army guys she was liaising with were flabbergasted that their archaeologist was not only a young woman but showed up with a baby on her hip!

If you think about it, the excavation unit is the perfect child care facility: lots of dirt to play in and the kid can't get out. Hopefully I'll have a chance to do this with my kids some day.

Pentametron: All the Tweets, in Iambic Pentameter

Pentametron is an algorithm that combs Twitter for iambic pentameters and puts them together into  poems. There's something for everyone, even soccer fans.

If that one makes too much sense, there's plenty of straight-up surrealism:


If it knows all the words, it checks the [Carnegie Mellon University] dictionary for the stress patterns of the words, which add up to the rhythm of the tweet. If the rhythm seems to match the pattern of iambic pentameter, the tweet goes into a bin of potential lines of poetry. On average, about one in every 50,000 tweets qualifies.


Bhatnagar takes inspiration from the the surrealists, but with a modern spin:


It's fascinating to me that on the internet of free phone and video calls, one of the most popular sites just moves words around. Lots and lots of words. One of the goals of Pentametron is to show how weird and interesting this giant flood of language is.

When I was reading a lot of ancient Greek I always loved the arcane intricacies of poetic meter. I'd love to see what kind of trochaic trimeter or Sapphic stanzas Twitter spews forth, but in the meantime I'll have to content myself with a some more of these romantic iambs:

Thanks to Umlud's Place for tipping me off to this one!
Posted by Dan at 8:53 AM No comments:

I'm not sure I entirely understand this one, but here's some pictures of tennis greats re-imagined as terracotta warriors. Above, Nadal. Below, Federer. But which is me, and which is mini-me?!? 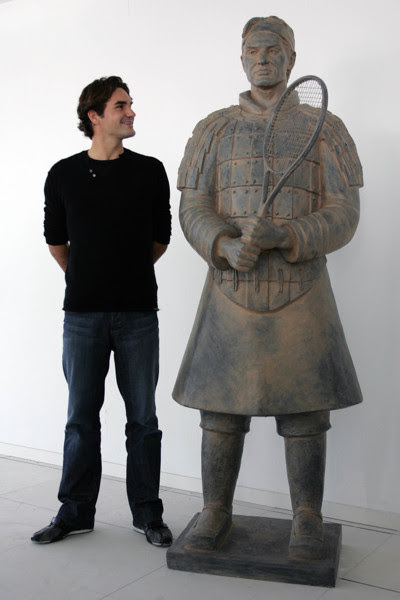 Apparently this has been done twice: once for the 2007 Masters Cup in Shanghai, and another round in 2010 for the Rolex Masters Shanghai. The final lineup: Roger Federer, Rafael Nadal, Novak Djokovic, Nikolay Davydenko, Andy Roddick, David Ferrer, Fernando Gonzalez and Richard Gasquet.

Read more about it here and here. Me, I'm confused. Which dead king are they guarding?!?!

Hat tip to Archaeosoup Productions for turning me on to this.

Archaeopop news roundup for May 4

Enmeshed in writing a paper about museums and historic preservation in Gaziantep, Turkey, so I'm just tossing you a few morsels to distract you.

Paul Krugman and Ron Paul debate Roman monetary policy. Krugman: "I am not a defender of the economic policies of the emperor Diocletian."

Tomb of the McMummies creator wants to branch out: "I would like to include mummies from different cultures and fast food chains such as Taco Bell Aztecs, Pizza Hut Pompeii, and scurvy Pirates made from Long John Silver's."

Looters take over the Crac des Chevaliers. The situation in Syria is bad, bad, bad.

The Getty lays off their whole education department. Now James Cuno can use the money to buy some of those artifacts being looted in Syria!

All you ever wanted to know about Etruscan sex life. "They are keen on making love to women, but they particularly enjoy boys and youths."

A fantastic time lapse video showing the origins of globalization.

My obsession with weird chainmail is officially out of control (via Drunkethics):

May 1 commemorates the men and women who fought and died for the 8-hour workday. One of the labor movement's explicit arguments for cutting working hours was to allow more time for people to pursue their own personal development. To a lot of people, that means reading about archaeology. But today, much of the best research is locked away from the public behind publishers' paywalls. This May Day, let's reflect on how academics can help end their complicity in a publishing system that denies publicly-funded research to everyone except the shrinking handful of universities in rich countries. In December I pointed out where the current model is taking us:


For-profit academic publishing is a suicide bombing mission against the academy. In pursuing their doomed business model, the big publishers risk turning the work we do as scholars into a giant echo chamber. Students take on a lifetime of debt, partly to pay for journal subscriptions that enrich a few corporations. Scholars are turned into serfs who must feed the beast new product for it to sell, or risk losing their already tenuous livelihoods. Institutions bankrupt themselves paying for ever more expensive journals without which they cannot compete.

Even Harvard University is buckling under the pressure. The faculty association and library have circulated memos demanding open-access publication, as the Guardian reports:


Robert Darnton, director of Harvard Library told the Guardian: "I hope that other universities will take similar action. We all face the same paradox. We faculty do the research, write the papers, referee papers by other researchers, serve on editorial boards, all of it for free … and then we buy back the results of our labour at outrageous prices.

According to the Harvard memo, journal subscriptions are now so high that to continue them "would seriously erode collection efforts in many other areas, already compromised". The memo asks faculty members to encourage their professional organisations to take control of scholarly publishing, and to consider submitting their work to open access journals and resigning from editorial boards of journals that are not open access.

I hope I don't need to point out that if Harvard University can't afford journal subscriptions, the system is badly broken. America's richest and most prestigious university library, unable to afford basic journals?

Though it's depressing that elite institutions have to be inconvenienced before anyone does anything about an obviously unjust system (imaging being a scholar in Africa!), momentum seems to be building to reform the system. The Federal Research Public Access Act, which would mandate that publicly-funded research be open access, is slowly making its way through the US Congress. The Academic Spring project is launching a mass boycott of Elsevier by scholars, and Britain's Wellcome Trust (the world's second-largest private funder of science) announced this month that all funded projects must be available to the public. (And kudos to the UK Guardian, which has been way out front in reporting on the growing movement).

Shockingly, some archaeology professional societies have been on the wrong side of the issue. The president of the Archaeological Institute of America, Elisabeth Bartman, came out against open access in a recent letter:


Here at the AIA, we particularly object to having such [an open access] scheme imposed on us from the outside when, in fact, during the AIA’s more than 130-year history, we have energetically supported the broad dissemination of knowledge, and do so through our extensive program of events and lectures for the general public and through our publications. Our mission statement explicitly says, “Believing that greater understanding of the past enhances our shared sense of humanity and enriches our existence, the AIA seeks to educate people of all ages about the significance of archaeological discovery.” We have long practiced “open access.”

Beyond the obvious misunderstanding of what 'open access' is (the AIA's scholarly journal is not), Bartman shows off the paternalistic attitude that gives academics a bad name. Keep the serious research for 'serious scholars', while giving the public the 'lite' version of events and lectures, better suited for their little pea brains. Thankfully AIA presidents usually serve for very short terms. She certainly does not speak for members with this ill-informed drivel, as many eloquent responses in the archaeology blogosphere attest (like this one, this one, this one, and especially this one).

The foolishness and greed of the big academic publishers, however, give us the chance to correct one of academia's original sins. Bartman's condescension is typical of scholarly attitudes for the last few centuries: the public deserves only the table scraps of scholarship - a few lectures here and there performed as charity work - while the good stuff is kept behind the closed doors of laboratories or the paywalls of academic publishers. Frankly if the publishing situation wasn't hurting scholars at 'good' universities I'm not sure there would be any movement on opening scholarship to the larger public. But think about it. But as Sebastian Heath and Charles E. Jones note in their great response:


The general public has to pay [to read articles] and that reduces the impact that archaeology has on public discourse. Shouldn’t we be giving our best, most carefully produced work the greatest chance to be widely read?

One thing that drives me crazy as an academic is feeling that my research is irrelevant. But much of that irrelevance is self-imposed: the public can't read our articles, even if they wanted to! The open access movement can help bring scholarship out the ghetto and toward the public.

The model of restricted academic publishing has been a stinking zombie for years, but is now starting to rot in earnest. As we all know, zombies need fresh brains to keep going. Elsevier, Springer, and their undead friends appear to have eaten their way through the whole population of the academic village. Here's hoping their immoral business model falls apart into a pile of stinking ooze ASAP.