One Minute Meme: All Creative Work is Derivative


The whole history of human culture evolves through copying, making tiny transformations (sometimes called "errors") with each replication. Copying is the engine of cultural progress. It is not "stealing." It is, in fact, quite beautiful, and leads to a cultural diversity that inspires awe.

This video's got me grinning ear-to ear. Music by Todd Michaelsen. Thanks to Patch Crowley, whose Survival of Antiquity tumblr is the ideal form of archaeopop sensibility.

The 'making of': Nina recruited a team to take go to the Met in New York "to find clear examples of visual language evolution". 900+ images and a lot of photoshop later, she had the images to make this video. Take a bow, Jesus! 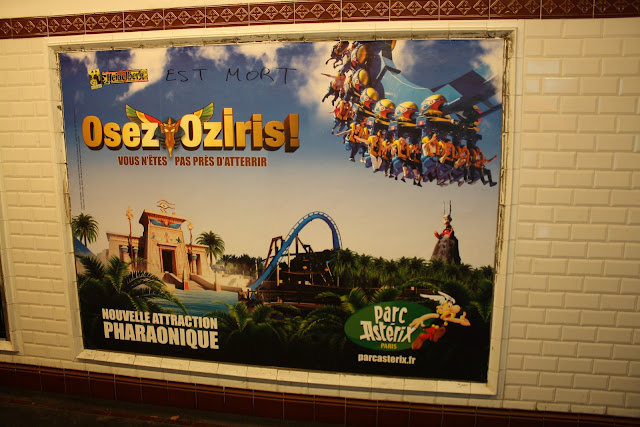 "Fly Osiris", the new roller coaster at 'Parc Astérix' in France. The "new PHARAONIC attraction"! Whatever you want to say about the French, at least they like a little archaeology in their theme parks. Spotted in the Paris Metro. Bonus points for the ironic graffiti (Osiris = god of the dead)

Rise of the drones

The drone revolution reached archaeology this summer. Archaeologists from Vanderbilt University are using a backpack-sized styrofoam drone called Skate to map the early colonial Peruvian site of Mawchu Lllacta from the air.


The drone can carry 1080p HD video cameras, infrared sensors, cameras, or other instruments. You can program its flight path to cover a desired area, then let it go. As Prof. Steven Wernke explains in the above video, can gather data equivalent to 3 seasons of ground-based mapping in about 10 minutes. What do you do with it then? Make a 3D model of the site, identify new features, really, whatever you want.
Another drone in archaeological use is the Microdrones md4-200, which was fitted with a stereoscopic camera in order to reconstruct some Scythian burial mounds in Russia and record this pyramid in Querétaro, Mexico.


Aerial surveillance never had such a funky soundtack.

Now I tend to think of drones as sinister, immoral military technology, which they are. Aurora brags that the Skate puts "first-hand intelligence, surveillance and reconnaissance for pop-up and fleeting threats... in the hands of the individual warfighter". They illustrate this with a goofy promo video, which dramatically reenacts a US soldier using a Skate to track down a trailer-dwelling redneck. Unconstitutional as hell, but that's a feature, not a bug. The interest in these things goes all the way to the top: the attentive news reader will have noticed Barack Obama's nauseating personal involvement in murder by drone in a number of countries. Drones are bad news for civil liberties and the rule of law.

On the other hand, many commercial technologies, including the interwebs you're reading this on, originated as US military projects, then trickled down to any number of useful consumer technologies. GPS on your iPhone, high-quality satellite imagery (Google Maps), and many more fit in this box. And drone tech is getting dirt cheap, spawning whole communities of DIY drone enthusiasts. Apparently Bill Gates wants to deliver vaccines to places in Africa using drones. And for the price of an iPad (the cheapest one mind you), you can go to Amazon and buy yourself a drone that you can control with your iPhone via wifi. I hear protesters in certain countries are using them to monitor the police now. The best part is, in the US flying your own spy drone is still legal!

Anyway, from this point of view it's no surprise that archaeologists are taking up the technology. It makes me a little sad that all those pre-digital age site mapping skills I learned as a wee sprout are now transcended, but the alternative is so much better. Finding sites, mapping sites, monitoring conservation, maybe someday even doing geophysical survey - all these things can be done at high quality for extremely low cost compared to a few years ago. I predict this technology will be close to mandatory within a few years.

It seems the contemporary masters of Middle-Earth would rather not have hobbits in the fossil record. Reports the Guardian:


It was, perhaps, inevitable that Homo floresiensis, the three-foot-tall species of primitive human discovered on the Indonesian island of Flores, would come to be widely known as "hobbits". After all, like JRR Tolkien's creation, they were "a little people, about half our height". But a New Zealand scientist planning an event about the species has been banned from describing the ancient people as "hobbits" by the company which owns the film rights to The Hobbit.

Dr Brent Alloway, associate professor at Victoria University, is planning a free lecture next month at which two of the archaeologists involved in the discovery of Homo floresiensis in 2003, Professor Mike Morwood and Thomas Sutikna, will speak about the species. The talk is planned to coincide with the premiere of The Hobbit film, and Alloway had planned to call the lecture "The Other Hobbit", as Homo floresiensis is commonly known.

But when he approached the Saul Zaentz Company/Middle-earth Enterprises, which owns certain rights in The Hobbit, he was told by their lawyer that "it is not possible for our client to allow generic use of the trade mark HOBBIT."

His first mistake was asking in the first place - I doubt these guys are patrolling the halls of academe for trademark infringement. Or then again, maybe they are. At any rate, the talk title was changed to "A newly discovered species of Little People – unravelling the legend behind Homo floresiensis." "Little people" still has a pleasantly Tolkeinian ring to it, I suppose.

The Tolkein Estate was uninvolved in this particular bit of mean-spiritedness.

Every generation writes the past it wants to read. This week, my favorite greenwashing network has a seasonally-appropriate article on Stone Age zombies:

The zombie apocalypse may be much more than a plot device exploited by modern horror movies. In fact, fears about the walking dead may go back all the way to the Stone Age. Archaeologists working in Europe and the Middle East have recently unearthed evidence of a mysterious Stone Age "skull-smashing" culture, according to New Scientist. Human skulls buried underneath an ancient settlement in Syria were found detached from their bodies with their faces smashed in. Eerily, it appears that the skulls were exhumed and detached from their bodies several years after originally being buried. It was then that they were smashed in and reburied separate from their bodies.
According to Juan José Ibañez of the Spanish National Research Council in Barcelona, the finding could suggest that these Stone Age "skull-smashers" believed the living were under some kind of threat from the dead. Perhaps they believed that the only way of protecting themselves was to smash in the corpses' faces, detach their heads and rebury them apart from their bodies.

But here's the creepy thing: many of the 10,000-year-old skulls appear to have been separated from their spines long after their bodies had already begun to decompose. Why would this skull-smashing ritual be performed so long after individuals had died? Did they only pose a threat to the living long after their original burial and death?

Who the heck knows? People do weird stuff with bodies. Sky burial? The Paris catacombs? Until recently in some parts of Greece people would exhume their relatives five years after death and wash their bones with wine. But did these ancient Syrians think the dead would come back in search of spicy brains? Notice that Ibañez (a colleague and a fine guy) doesn't make any such claim - it's the journos trying to make archaeology 'hip and relevant'. It's not the first such 'find': we also have ancient zombies at Hierakonpolis in Egypt, Cahokia in Illinois, Easter Island, and Ireland.
It reminds me a lot of the gay caveman story from last year:

The skeleton was found in a Prague suburb in the Czech Republic with its head pointing eastwards and surrounded by domestic jugs, rituals only previously seen in female graves. "From history and ethnology, we know that people from this period took funeral rites very seriously so it is highly unlikely that this positioning was a mistake," said lead archaeologist Kamila Remisova Vesinova. "Far more likely is that he was a man with a different sexual orientation, homosexual or transsexual," she added.

The papers had too much fun with this one (headlines: "first gay caveman", "the oldest gay in the village", "caveman outed"), provoking rebukes from the excavators. As John Hawks noted, "to have a 'gay caveman,' you need a skeleton that is both gay and a caveman. And this ain't either!" Indeed, we're talking about the Bronze Age here, and 'non gender normative' is far from our concept of 'gay', (as Kristina Killgrove and Rosemary Joyce elegantly explain). In practice every culture has many ways to express gender, even in ours which sometimes pretends that there's just two kinds.

But ultimately these stories - like a lot of popular writing about the past - are about making our  contemporary cultural obsessions seem normal by finding them in an excavation trench. The LGBT struggle for equal rights has been all over the news for a decade now (and winning). And with the proliferation of zombie-themed media in recent years you'd think there was a zombie community in the midst of some kind of recognition struggle too. I've been sloggin my way through AMC's zombie-themed soap opera (much too much family drama for my taste), and puzzling what's behind this increasingly crazy obsession. Why are the US Marines running actual zombie combat drills? Why does the CDC have a zombie preparedness page? I want to say it's a mélange of American fears: foreign hordes, terrorists, and the loss of our empire rolled up together. But I'm still scratching my head.

Regardless, keep your eye out for these archaeological headlines that seem a little too hip to be true: they're pointing to our own present cultural obsessions more than the past. With that in mind, let's look at the logical next step: Clive Barker directs 'Zombies vs. Gladiators'!!!