Yes, they went there. Restaurant chain Denny's is channeling the spirit of Dionysus, filtered through the prurient enthusiasm of the American nerd, to bring you 'Baconalia'.

From a purely philological point of view, I must point out that bacon was not used in Bacchic rites, nor is the pig one of Dionysus' animal companions (he was rolling with much cooler panthers and serpents). And while I enjoy bacon, I find many items on this menu repulsive: 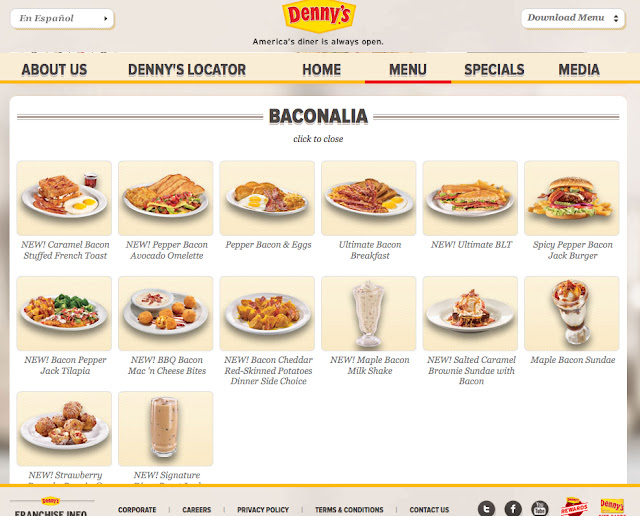 Dirtying the waters: Archaeopop in Macao

A version of this article first appeared in Pork #10. Get it here. 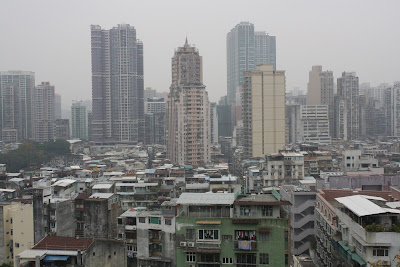 Macao. This former Portuguese colony off the coast of China's Guangdong province is packed with baroque churches, old forts, and gritty 20th century apartment buildings dyed gray and black by the ever-present pall of air pollution. Since Portugal washed its hands of the place in 1999 the city has been transformed into Asia’s largest casino destination: the Cotai Strip, a giant landfill between two islands, was created about 5 years ago and now boasts the full complement of Vegas hotels (Venetian, Sands, MGM) along with some Asian chains like the Galaxy or the Waldo. Of course gambling on anything and everything is as Chinese as dragons or jade. The Macao Museum even has an exhibit about Macanese cricket fighting, which drew huge crowds of bettors to watch the celebrity insects fight to the death – some of the past champs are actually preserved in the museum!

So gambling is not a new thing: but creating a whole new landscape lets the casino developers indulge their rich fantasy lives, which in Macao has a strong archaeopop flavor.

Exhibit 1: the Greek Mythology Casino. Outside, a hideous pastel Poseidon lounges in a huge fountain with some wild-eyed pastel horses. Walking into the atrium, you find yourself staring up a staircase at a giant statue of Zeus, holding thunderbolts. The big guy is flanked by hideous stucco murals of centaurs getting sexy time with Lapith women, and bulbous naked hoplites with chariots going into battle. (Low quality, high relief.) Behind Zeus the kitsch ends, and you step into a elegant warren of VIP baccarat and blackjack tables with eye-bleeding minimum bets ranging from US$150-$2000.

I wish I had something deep to say about how this casino relates to Chinese culture, but honestly I'm just kind of baffled by this place.

Exhibit 2: the Venetian. You probably heard about the one in Vegas, this one is a copy of that, which is a loose interpretation of the real thing. It’s Venice reimagined as an indoor shopping mall. The stinky green water of the real Venetian canals is swapped out for a glowing sapphire blue liquid. You can take a gondola ride, but all the gondoliers are Chinese women. 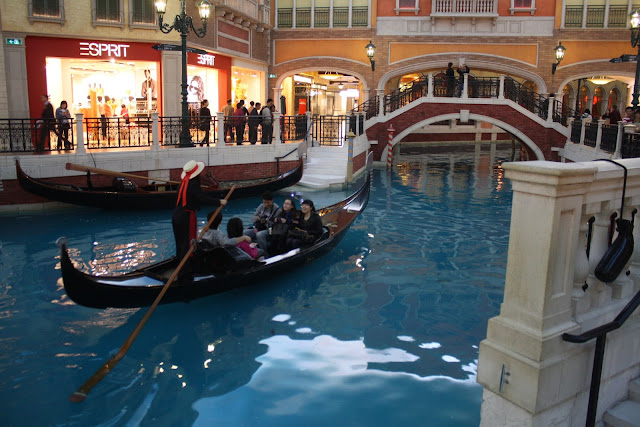 The lighting and fake sky gives everything a creepy twilight feel, like it’s always about to get dark.
We ended up at the food court and I got some spicy soba noodles for my oncoming head cold, then went downstairs – under St. Mark’s square – to the giant gambling cavern. I had wanted to play some blackjack, but even here the minimum bets were US$40 and none of the dealers spoke English. I contented myself with losing some Hong Kong dollars on the slots and called it good.


Exhibit 3: Fisherman’s Wharf. This is not a casino, rather a baffling free amusement park with miniature districts that look like Amsterdam, a Tibetan temple, the Colosseum, Babylon, and a Tang Dynasty fortress. There’s also an interactive volcano (it erupts!) and an incredibly non-PC paintball zone designed to look like an Iraqi village so you can play ‘Marines in Fallujah’.


Real estate in Macao being insanely expensive, all these things are visually piled on top of each other in a totally loopy juxtaposition. The colosseum has a shopping mall inside – big surprise – and some kind of performance venue on the inside, but looked deserted. 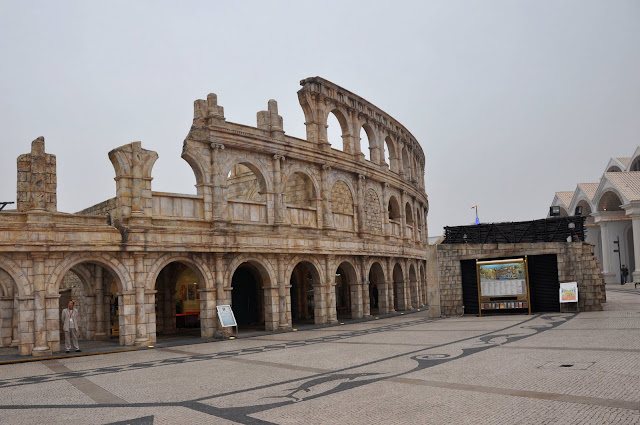 Oh, and did I mention the new year’s decorations? Everything was tricked out in red to usher in the year of the snake. Zeus was flanked by giant strings of firecrackers, St. Mark’s square had a giant red gong, And the Largo do Senado - the old government center of the colony - was crammed with snake decorations.

I was not sorry to leave Macao, between the terrible air pollution and the dirty feeling that flourescent lights and gambling leave on your skin. We had a 20th-floor hotel suite with a glorious view… of dirt barges and half-finished landfills.

That is to say, Macao is very ‘inauthentic’, but no one seems to care and I think that’s fine. The romantic old Macao of Portuguese churches, fighting crickets, and fireworks factories was inauthentic too – but in a way that made white European visitors feel comfortable. The focus on historical reconstruction IS part of a fascinating recent Chinese obsession with replicating European stuff. On the mainland there’s tons of new housing developments that try to look like little British towns. Somewhere in tropical Guangdong there’s now an exact copy of the Austrian alpine village of Halstatt, a World Heritage Site.

The ‘European lifestyle’ in general is hot for aspiring Chinese plutocrats: China consumes 25% of the world’s luxury goods and there’s so many Italian stores (Balenciaga, Gucci, Pucci, Versace, Armani, Tumi, Ferragamo, etc.) that when I first went to Milan it reminded me of… Hong Kong. The historical stuff is largely an offshoot of this kind of richy-rich Europhilia. But on the other hand it’s not weird for rising powers to associate themselves with older civilizations. The Romans pretended to be Greeks, the British pretended to be Romans, the Americans pretended to be Greeks and Romans, and now the Chinese are pretending to be Americans pretending to be Europeans. These Chinese visions of Greece, Rome, Babylon, and Austria are filtered through Walt Disney’s ghost and the misdeeds of American real estate developers.

The results are pretty entertaining. But I’m disturbed for the Chinese. For the Americans to look elsewhere for history kind of makes sense: since we killed or drove out all the native inhabitants, it was easy to pretend that the whole country was a blank slate. The results of importing Greco-Roman civilization are still weird, though – there’s an exact replica of the Parthenon in Nashville! But given China’s badass 5000 year civilization it’s disturbing that they’re looking elsewhere for inspiration. It seems like a sign of decadence, as if the insane boom of the last 20 years has lost steam and is beginning to veer into unreality.
Posted by Dan at 11:31 AM No comments: