Just before I got on the plane for Istanbul, I prevailed on a professor friend of mine to come with me to Detroit's abandoned Packard factory. Built 1907-1909 by Albert Kahn, it was maybe the world's first large reinforced concrete building. Now abandoned, its millions of square feet of empty space are a great place to watch the archaeological process at work.

Acres of rooftops are now home to tiny wetlands, complete with grass and birds: 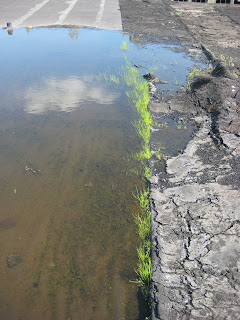 Little forests are gradually wrestling the factory to the ground: 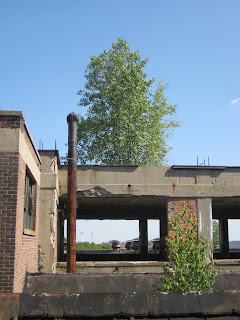 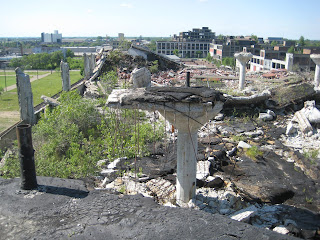 Sometimes it takes on almost a Classical air: 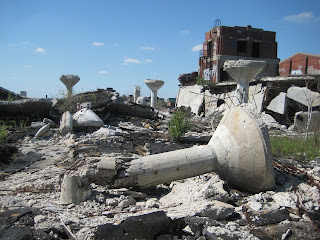 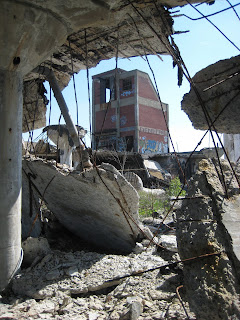 The ruins of Detroit are, more and more, becoming sites of memory and nostalgia for white Michiganders who yearn for their lost industrial glory. Places like Packard are wonderfully well-documented with wonderful Flickr sets like this one, from my friend (and birthday twin) Pat. (I've put my own photos up here out of sheer vanity, but he's a much better photographer.) The old factory even gets the occasional weird recreational use - some people even organized a croquet game there once, in full Edwardian costume!
Posted by Dan at 6:52 AM 1 comment: 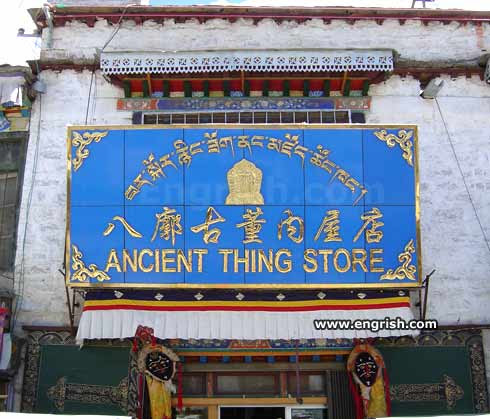 I just arrived in Istanbul, where I’ll be for a couple days. I’m headed to the wonderful archaeological site of Sagalassos for the summer, where I’ll be helping to start a community archaeology project. (Much more about this later!)

Since Turkey is on my mind lately, I thought I would share some photos of this amazing poster I saw in Kocaeli at the 2007 Kazı Sonuçları Toplantısı (Excavation Reports Meeting), an annual government-sponsored archaeology symposium. These were put up as part of the general décor. The man with the dramatic eyebrows is Mustafa Kemal Atatürk, founder of the modern Turkish state. He gazes over a trippy pastiche of iconic ruins: Ephesus, Nemrud Dağı, Dıvriği, the Trojan horse, and a theater (I think from Hierapolis/Pamukkale). 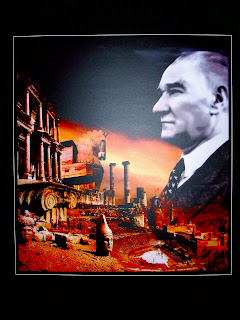 This picture is mind-blowing on so many levels! Atatürk himself was something of a patron of archaeology (especially Hittite), and visited digs like Alacahöyük and Gavurkale while he was president (1924-1938). But there’s much more than that going here. With a visionary look in his eyes, he (and by extension the Turkish Republic) is claiming and supervising the archaeology of Anatolia. A less obvious aspect of this picture is that these are all sites on the UNESCO World Heritage List.

Turkey has thousands of cool archaeological sites, but only nine are on the WHL (with 23 more on the Tentative List, mostly awaiting preparation of site management plans). Choosing these alone as the symbols of the nation’s archaeology implies that the real concern here is using archaeology to define Turkey’s place in the world. It's part of an old tale: much of Turkey's modern history has been consumed with its quest to gain acceptance as a modern European state. The lack of public knowledge about archaeology among Turks today reflects how much the nation's self-image has been created for foreign consumption. 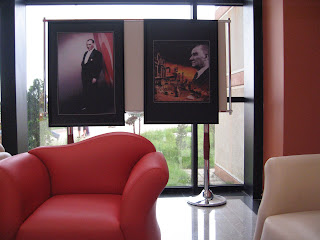 That this image is not often crafted by archaeologists is amusingly evident in the choice to use the Trojan Horse model now at the entrance to the site of Troy as the symbol of the site. The horse is an entirely modern fiction - it represents the idea of Troy rather than anything about the archaeology of the site itself. (Unconnected aside: when I visited Troy, the first thing I heard was twittering Greek voices inside it - the Trojan Horse was literally filled with Greeks!)
Posted by Dan at 11:06 AM No comments:

H-NET is a listserv for historians. Sometimes it delivers gems like this to my inbox, and I fall in love with the academic life all over again.

I am looking for references and discussions of ice fishing, particularly but not exclusively in New England. More specifically, I'm looking for suggestions of where I might turn for anecdotes, personal narratives, or histories that focus on the interaction of humans and fish on frozen water. Any suggestions would be deeply appreciated. You can respond to the list or to me directly: xxxx@xxx.edu

New England? Michigan is definitely where it's at, as this under-ice pike fishing video demonstrates:
Posted by Dan at 7:39 AM No comments:

Archaeology in Fiction: H.P. Lovecraft, “Imprisoned With the Pharaohs” 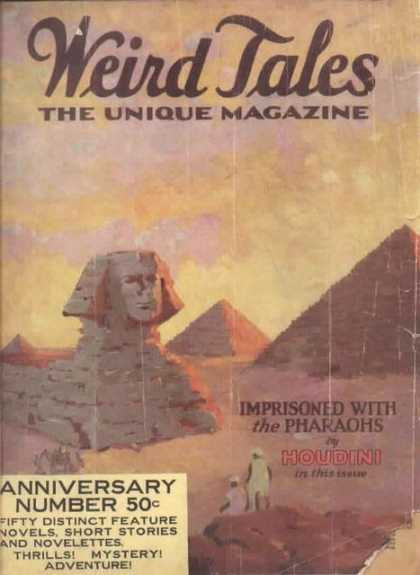 "Far over the city towered the great Roman dome of the new museum; and beyond it - across the cryptic yellow Nile that is the mother of eons and dynasties - lurked the menacing sands of the Libyan Desert, undulant and iridescent and evil with older arcana.

The red sun sank low, bringing the relentless chill of Egyptian dusk; and as it stood poised on the world's rim like that ancient god of Heliopolis - Re-Harakhte, the Horizon-Sun - we saw silhouetted against its vermeil holocaust the black outlines of the Pyramids of Gizeh - the palaeogean tombs that were hoary with a thousand years when Tut-Ankh-Amen mounted his golden throne in distant Thebes. Then we knew that we were done with Saracen Cairo, and that we must taste the deeper mysteries of primal Egypt - the black Kem of Re and Amen, Isis and Osiris.

‘Imprisoned With the Pharaohs’ is a Egyptological horror yarn starring Harry Houdini, and loosely based on one of his tall tales from his tour of Egypt. Ghostwritten by H.P. Lovecraft, it was first published under Houdini’s byline in the summer 1924 number of Weird Tales.
In the story (Lovecraft's only one with an archaeological setting) Houdini gets the sense that archaeologists might be hiding something about the Giza plateau:

Such fascinating things were whispered about lower pyramid passages not in the guide books; passages whose entrances had been hastily blocked up and concealed by certain uncommunicative archaeologists who had found and begun to explore them.

Of course, this whispering was largely baseless on the face of it; but it was curious to reflect how persistently visitors were forbidden to enter the Pyramids at night...

Houdini hires a dragoman, Abdul, as his guide to Giza, and duly makes the rounds of the monuments. But atop the great pyramid, the escape artist is set upon:

Without warning, and doubtless in answer to some subtle sign from Abdul, the entire band of Bedouins precipitated itself upon me; and having produced heavy ropes, soon had me bound as securly as I was ever bound in the course of my life, either on stage or off...

Setting me down on a surface which I recognized as sand rather than rock, my captors passed a rope around my chest and dragged me a few feet to a ragged opening in the ground, into which they presently lowered me with much rough handling. For apparent eons I bumped against the stony irregular sides of a narrow hewn well which I took to be one of the numerous burial-shafts of the plateau until the prodigious, almost incredible depth of it robbed me of all bases of conjecture.

Houdini, of course, escapes from his bonds. But I’m not going to ruin the story by telling you all the creepiness that happens next. (Read the story here online, or pick up the paperback for cheap.)

Lovecraft... Smiling? (h/t Accelerating Future)
Lovecraft’s fiction is all about the past and its secrets. Though he was a deep lover of antiquity, he was also afraid of it: in his stories, aberrant things lurk in dark attics and ancient texts. Looking too closely into the past leads to terror, madness, and death.

The man himself is still a towering figure in horror, science fiction, and fantasy. Lovecraft (1890-1937) was the epitomy of the crusty Yankee: cynical, reserved, and suspicious. He detested foreigners, technology, and modernity - and famously dated his letters 200 years in the past. At the same time, he was a starry romantic, a crafter of science fiction, and a mentor and friend to dozens of pulp fiction writers including Fritz Leiber, Clark Ashton Smith, and Robert E. Howard. An avowed anti-Semite, he was nonetheless a big fan of Houdini (the son of a rabbi), and married a Ukranian Jew, Sonia Greene (thereby incurring the deep displeasure of his aristocratic maiden aunts). I have a great affection for the man: his bizarre and contradictory personality is totally all-American, and his hallucinatory evocations of the cosmic horrors lurking behind the veils of history have shaped me as a writer and a reader more than I care to contemplate. This site has much more about him.