A jug of beer, a glass of wine, and trowels

One charming thing about Turkey is that so many alcoholic beverages are named after archaeological sites. About 90% of the beer sold in this country is Efes Pilsen, which is both refreshing and named after the ancient city of Ephesos. They also sponsor some archaeological work, for instance at the great Hellenistic city of Assos. 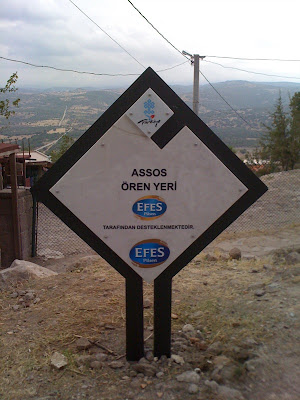 This sign is first thing you see when you pass the ticket gate: Assos ruins, brought to you by Efes Pilsen! Yeah. Some bright bulb in the Ministry of Culture and Tourism decided that all of Turkey's archaeological sites should have signs like this: an oversized rusty diamond with a notch. The design doesn't look good anywhere, I promise you, though this one with the multiple beer logos is especially bad.

It's a great site, though, with a dramatic acropolis, fantastic Hellenistic walls, and a super cool necropolis and a panoramic view of the Greek island of Lesbos. (Cue Lesbian jokes.)
There's also a few archaeological digs (which shall remain nameless) that get free beer from Efes Pilsen as an 'in-kind donation'. I am told it is used for 'professional development'.

Then there's wine. There's lots of examples but it's been a real long day, so I'll give you one: the 'Kızıbel' wine from Likya vintners. It's named after the wonderful painted tomb discovered near Elmalı in Muğla provınce in 1969, and excavated by the late Machteld Mellink of Bryn Mawr College. The bottle reproduces the charioteer from the inner walls of the tomb, which demonstrates Greek influence in southwest Anatolia already in the 6th century BC. Honestly I have little memory of how this wine tastes. Kind of merlot-y I think. The Turkish wine industry is more or less where California was in the early 1980s - lots of ambition but lacking a lot of phenomenal product. They have labeling covered, however. 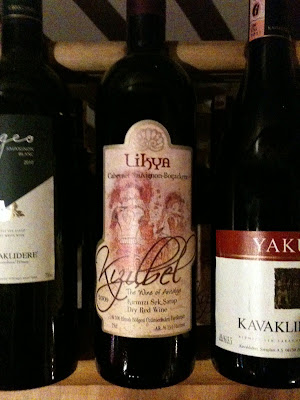 Like my memories of this wine, the wall paintings in the tomb itself are fragmentary but show a lively realism. The ancient Likyans were optimistic that their favorite things in daily life (chariots, drinking parties) would be with them after death, too, which led to a lot of cool paintings and carvings, most now lost. The southwest coast is a very beautiful region of the Turkey, I recommend a trip.
Posted by Dan at 12:45 PM 1 comment:

Six Degrees of Archaeopop: Wu-Tang to the Knights Templars

Let me introduce you to Six Degrees of Archaeopop. It’s exactly like ‘Six Degrees of Kevin Bacon’ or 'Hitler Hops' except with history and archaeology themes.  Take a pop culture phenomenon on the one hand, a distant historical event on the other hand (I recommend 300+ years), and figure out how they connect in less than 6 steps.


The first pairing that jumped to mind: the Wu-Tang Clan and The Knights Templar. Actually this one's pretty easy! If I may:

1) Most Wu-Tang Clan members are part of the
2) 5 Percent Nation, who are an offshoot of the
3) Nation of Islam.  Wallace Fard Muhammad, the founder of the Nation, was involved with the
4) Moorish Science Temple, an esoteric offshoot of
5) Freemasonry. And Freemasonry was inspired by, if not directly founded by, the
6) Knights Templars.

Wasn’t that fun? Maybe this will be a regular feature. I invite your submissions and challenges in the comments or at archaeopop@gmail.com.

Now, to address a philosophy-of-knowledge issue: is it “true” that the Wu-Tang and the Templars are connected?

In every way that matters, yes. The Wu-Tang Clan are as much descendants of the Templars as they are inheritors of Kung Fu traditions from China - actually, more so given their Western cultural origins.

In fact, all historical revivals involve a selection and manufacturing of the past. The Nazis wanted to find Germanic Aryan tribes in the archaeological record, so they decided what archaeological characteristics fit the bill, and then went looking for them. Biblical archaeologists find it hard to see anything that doesn’t fit with a bible story. Israeli archaeologists enjoy excavating the "city of David" under Palestinian neighborhoods of Jerusalem, for obvious reasons.

It's a different approach than archaeologists themselves take, but that's just fine with me. Popular culture is free: we can  decide that we’re the reincarnation of Napoleon, or Seti I's mother, or the high priests of Atlantis, and live our lives as if that was true. I like having these characters wandering around. The challenge for archaeologists is not to eliminate fantasy, but to create versions of the past that are more accurate and just as appealing.
Posted by Dan at 11:26 AM 1 comment:

Just a cool picture, from this article about ancient graffiti.
Posted by Dan at 11:59 AM 1 comment:

Zizek: Why archaeologists are the best lovers

Today's archaeopop moment is brought to you by philosopher Slavoj Zizek.

Wandering around a garbage dump in New York, Zizek holds forth on the ideology of ecology, and why we have to find beauty pollution and garbage if we really love humanity. He's not joking, and I completely agree with him.


I think that this notion of nature, nature as a harmonious, balanced, reproducing, almost living organism which is then disturbed, perturbed, deranged by human hubris, technological exploitation and so on, I think is a secular version of the story of the Fall. The answer should not be that 'there is no Fall, we are part of nature', but on the contrary that there is no nature. Nature is not a balanced totality that we then disturb. Nature is a series of unimaginable catastrophes. And we profit from them!

A lot of ecological thinking embraces the idea of nature as something perfect and external to humanity. As we've said before in this blog (here, here, and here), that's self-righteous idiocy that is harmful to people and biodiversity at the same time. On this planet, in this age (the anthropocene), ecosystems are a cultural phenomenon. Our garbage matters. It is nature. We have to own it, and learn to love it, as Zizek says:


To recreate, if not beauty, than an aesthetic dimension in things like this, in trash itself, that is the true love of the world. Because what is love? Love is not idealization. Every true lover knows that if you really love a woman or a man you don't idealize him or her. Love means that you accept a person with all its failures, stupidities, ugly points, nonetheless the person is an absolute for you, everything that makes life worth living. You see perfection in imperfection itself. and that's how we should learn to love the world. A true ecologist loves all this. [Points to huge pile of garbage.]

He's exactly right. Trash has a sensual quality: like sex, it can be harsh and garish or light and gentle. Compost in your backyard, or a toxic vortex that covers the sea. Excavating someone's trash, as archaeologists do, gives you a moment of intimacy with people long dead, and gives us the chance to judge them. Archaeologists are obligated to be interested in these moments of waste and discard, since that's what the archaeological record (and the "environment" itself) is. The challenge is to find beauty in the ruins, to love the flaws and ugly moments that we manifest as a species. If we don't, we lose the struggle for sustainability.

It's the new Archaeopop slogan: "give me ruins, middens, and can dumps, and I will show you true love."
Posted by Dan at 2:51 PM No comments:

"Sun god flamingo eagle bowl eye" sounds like some tattoos I've seen, actually...
From Married to the Sea, via Cultural Property Law.
Posted by Dan at 9:23 AM No comments:

I'm in Turkey this month, doing research with some colleagues from Bologna on how cultural heritage here is organized, administered, and funded. I'll be blogging a little less than usual, but I'll share some reflections on our research as I'm able.
One of our case studies is the excavations at Yenikapı, the hub station for the Marmaray metro that will connect the European and Asian sides of Istanbul under the Bosphorus. The Japanese-Turkish consortium building the subway thought that they had picked a clever spot outside of the archaeological zone of the ancient city - but as they excavated they found a Byzantine port with 32 well-preserved shipwrecks dating from the 5th-11th centuries! Many of them sunk with their cargos abord. This video from NatGeo is a good introduction (they don't allow embeds).
Salvage excavations at the site are winding up after 5 years, and we're looking forward to learning more about the history of the project, which has been the largest urban archaeology project in Turkey's history. Funded by the construction subcontractors of the subway project, the archaeological work was supervised by the Istanbul Archaeology Museum with cooperation from Istanbul University, Texas A&M, and many other institutions.

Oh, and they found some 8,500 year old burials, extending the earliest known settlement of the city by a couple thousand years!

Salvage archaeology in an urban setting is pretty different from the Indiana Jones stereotype. It's more of an industrial operation, with huge tensions between construction companies (who live and die by deadlines) and archaeologists (who would much rather take their time and not think about money). What we're going to be doing is reconstructing the administration of the project: its organization, funding, history, controversies, and aftermath (what are they going to do with all those boats?!). It should be fun. I'll keep you posted.