It had to happen eventually... From the delightful Pepper Spraying Cop Tumblr. Hat tip Lindsay! 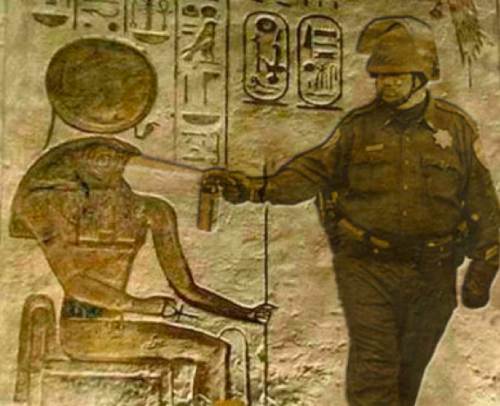 “Jesus, do you realize how hard it is being in charge of the WHOLE FUCKING SKY? Its rough, man. ROUGH. I got all these assholes praying to me for this or that, I got Osiris crawling up my ass all the time pulling those fucking guilt trips on me because I don’t want to run the family business forever… LAY OFF. Can’t I just take a break for a minute and have a seatAUUUAHAGHAHAGAHAGHGHHHHHHHHHHH” 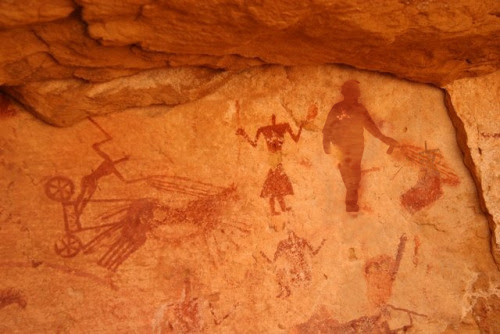 “Morguk got wasted and rolled his razor scooter again. God dammit, now we have to schlep all the way over the Euphrates to get parts for that damn thing. Again. Grounding doesn’t work. Taking away internet privileges doesn’t work. Should we send him to boarding school? Would that make us bad parentsAUUAHHAGHAGAHAGHGHHHHHHHHHHHHHH”


Meets professional standards of conduct in research and professional activities of the discipline:
The committee was particularly generous (and vociferous) in offering their opinions regarding this criterion. Permit me to list just a few of the more troubling accounts I was privy to during the committee’s meeting. Far more times than I would care to mention, the name “Indiana Jones” (the adopted title Dr. Jones insists on being called) has appeared in governmental reports linking him to the Nazi Party, black-market antiquities dealers, underground cults, human sacrifice, Indian child slave labor, and the Chinese mafia. There are a plethora of international criminal charges against Dr. Jones, which include but are not limited to: bringing unregistered weapons into and out of the country; property damage; desecration of national and historical landmarks; impersonating officials; arson; grand theft (automobiles, motorcycles, aircraft, and watercraft in just a one week span last year); excavating without a permit; countless antiquities violations; public endangerment; voluntary and involuntary manslaughter; and, allegedly, murder.
Dr. Jones’s interpersonal skills and relationships are no better. By Dr. Jones’s own admission, he has repeatedly employed an underage Asian boy as a driver and “personal assistant” during his Far East travels. I will refrain from making any insinuations as to the nature of this relationship, but my intuition insists that it is not a healthy one, nor one to be encouraged.

Telecom Italia Mobile has this fantastic series of ads with ancient Romans chilling out and talking on their cell phones. Love the costume design, good production value trumps the cheerful banality any day.


From the marketing text:

"The secret of Julius Caesar's success? A smartphone for navigating online, chatting with Cleopatra, and uploading battle photos to Facebook! But among the senators, there are some who doubt his supremacy...;)"
Posted by Dan at 6:54 AM No comments:

Three Forays into the History of Climate Change

From Archaeopop's environmental desk, here's a roundup of three interesting articles on archaeology and the environment:

1) Via Ars Technica, a new paper uses residue analysis to suggest that the advent of farming didn't change everything all at once


A recent paper in PNAS brings some evidence to challenge the prevailing notion that farming immediately and completely changed everything about human society, from diets to economies to tool usage. The authors suggest that hunting and gathering persisted even after farming had been established. They deduce as much from the presence of specific lipid biomarkers left inside ceramic vessels that date from the time that plants and animals were first domesticated.

More evidence that farming was maybe a side-effect of the neolithic revolution, rather than the cause of it. In other words: massive transformation of land use is maybe not necessary for technological advancement.

2)  In Low-tech Magazine, Kris De Decker gives us a fascinating look into the Dutch energy crisis of the 1500s - and its catastrophic environmental effects.


By the time Antwerp came to dominate the world economy, its peat reserves had already been dug out to satisfy the energy needs of Flanders in the course of the preceding two centuries. As a result, peat digging shifted to the neighbouring province of Holland, from where the turf was exported to Antwerp... peat diggers developed a new tool, the "baggerbeugel" (a dredging net on a long pole, there seems to be no English translation for the term). Standing on a small boat or at the waterside, this tool allowed them to cut peat below water level and haul it up. This technique, called "slagturven" (again, no English translation available), greatly enlarged mineable peat reserves...
Worse, however, was the destruction of the landscape and the loss of agricultural land. Wherever the peat was mined below the water table, land disappeared into the waves. This was a rather ironic consequence for a country that spent so much effort reclaiming land on the sea elsewhere on its territory through the use of windmills. Every year, about 115 to 230 hectares of land was lost as a result of peat production below the water table. The exhausted peat bogs formed lakes that expanded to cover vast areas throughout Holland and Utrecht.

3) From Science News: was the Little Ice Age the Native American revenge for all those diseases?
More research that  suggest that the 'pristine' North America found by European settlers was caused by disease rather than some innate Indian rapport with 'nature'.


By the end of the 15th century, between 40 million and 100 million people are thought to have been living in the Americas. Many of them burned trees to make room for crops, leaving behind charcoal deposits that have been found in the soils of Mexico, Nicaragua and other countries. About 500 years ago, this charcoal accumulation plummeted as the people themselves disappeared. Smallpox, diphtheria and other diseases from Europe ultimately wiped out as much as 90 percent of the indigenous population. Trees returned, reforesting an area at least the size of California, Nevle estimated. This new growth could have soaked up between 2 billion and 17 billion metric tons of carbon dioxide from the air.

And thereby cooled the earth enough to cause a century of cold in Europe.  I covered this line of research - which I find very persuasive - in a January article that you should read!

A Meditation on Medieval Marketing

Over at the Harvard Business Review blog (!) Grant McCracken muses on the marketing secrets of the middle ages (via Boing Boing):


The medieval world took for granted that the universe was filled with secret messages, placed there by God and the correspondences on which the world was built. What did not come from God or nature was made by man in the form of emblems, icons, and insignia insinuated into public life. The home of Sir Francis Bacon was covered with arcana. Only people with a keen eye and a university education could make sense of it.
By the 20th century, all of this was stripped out by the modernist impulse that said form should be about manifest function, not secret meaning. This world was rendered perfectly clear, rational, and transparent. No decoding necessary. Consider Mies van der Rohe's Seagram building. Or Charles and Ray Eames' lounge chair. What you saw was what you got.
Marketing was created in this moment. And the idea was complete transparency. Marketing came to stand for big, bold, simple messages, fired repeatedly at a mass target. "Keep it simple, stupid" was the order of the day. This was a world of absolute clarity and shameless repetition. How things change. The 21st century loves a puzzle. We have the skill and the patience. We have quicker eyes. No couch potatoes, we. Perhaps it's that we now live with so much noise that we are better at decoding signals. We are ready for secret messages. To judge from the rest of popular culture, we are hungry for them.

This is a take on Weber's notion of the disenchantment of the world. After a while, complete simplicity starts to look like idiocy. For some reason this makes me think: were the semiotics of the hipster moment - the emphasis on exclusivity, in-jokes, and irony, symbolized by the elevation of banal products like Pabst Blue Ribbon beer - an attempt to re-enchant this world of spare, obvious, distinctly un-magical consumer products?
Posted by Dan at 8:16 AM No comments:

UNESCO suspends programs due to US cuts

In the wake of the acceptance of Palestine as a member, UNESCO has had to take a 22% budget cut - since US law forbids the funding of any UN agency that recognizes it. Without American funding, director-general Irina Bokova has announced total suspension of UNESCO programming until the end of the year, for a saving of $35 million.

More in Le Monde (in French).

As Le Monde also notes, Israel is increasingly isolated diplomatically: only 14 members voted against Palestine's admission, including the US, Canada, Australia, Germany, the Netherlands, the Czech Republic, and the usual stalwart allies like Lithuania, Panama, the Soloman Islands, and Vanuatu. Outside of the US and western Europe there's no debate whatsoever.
Posted by Dan at 8:09 AM No comments: