Following on last week's post, more fun with old maps. Today, the amazing work of René Voorberg, who's created a mashup of an ancient Roman road map - the Tabula Peutingerana - and the Google Maps API. It works as a route planner: you put in your point of origin and your destination, and it gives you the shortest route on the Roman road network. Here's the results for an itinerum from London to Bologna. 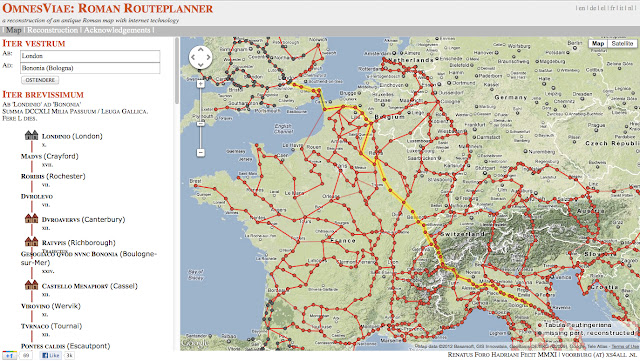 As you can see, the interface has some cute features, like being in Latin (iter vestrum means 'your route', iter brevissimum means 'the shortest route'). The icons for towns, rivers, and mountains used on the Peutinger Map are reproduced in the left sidebar and on the map itself. The author spent a ton of time geolocating over 2000 ancient place names on the modern map, so you can use either ancient or modern names (Londinium or London, say). Here's how Istanbul and the Sea of Marmara look. The Peutinger map is an amazing artifact. It's the only road map to survive from the Roman Empire, as a medieval copy of an original map prepared somewhere around 400 AD but incorporating older information (Pompeii, for example, is still on the map). It's the last survivor of a sophisticated 500-year tradition of Roman surveying and mapping, and shows the system of Roman public roads, with mileage and natural features.
The map itself, though, looks awfully funny to the modern eye:

That's Europe all right: but it's stretched east to west and smooshed north to south, so that the whole continent fits into the height of a parchment scroll. This is not so much a bug as a feature: the map is meant to show a series of linear itineraries along well-built roads. A close-up:

That's Noricum (Croatia and Bosnia) on top, central Italy in the middle, and Tunisia down at the bottom. The red lines are different routes, with a slight jog marking minor place names. Once you get over the tyranny of our own cartographic conventions it's actually quite practical. (Though I still find the Google Maps API a little easier to use.
The literal book on the map was written by Richard Talbert, whose data is the main source for Voorberg's Omnes Viae. Talbert has his own scholarly treatment of the map up online, with GIS layers you can use to highlight different features.  (It's a companion to his book, Rome's World.) Another online version of the map can be found here (nicer to look at).
Posted by Dan at 12:14 AM