via LOLTATZ, subvia Daily Hitler (some content NSFW).
A lot of people like the image of the archaeologist. Sometimes more than they like archaeology itself. A tattoo is a fine way to proclaim your commitment to being a 'cowboy of science'.

(Though I am concerned. This looks like one of those horrible tiny euro-trowels, rather than a proper Marshalltown).

How much of our love for archaeology is about building a personal identity as an 'archaeologist'? How much of it is really about the work of interpreting, publishing, and teaching?

Is archaeology a 'lifestyle choice'? Is it part of your 'personal brand'?
Posted by Dan at 11:55 PM 3 comments: Links to this post

Thought I'd check in and let you know why posting is a bit light this summer here at Archaeopop. 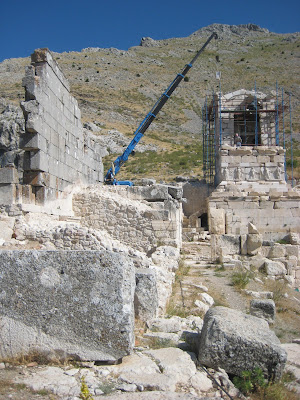 Since late June, I've been in Ağlasun, Turkey, working at the site of Sagalassos, a project of the Katholieke Universiteit Leuven directed by Prof. Marc Waelkens. It's an amazing place to live and work - you should scroll around the website a bit, and also check out Archaeology Magazine's Interactive Dig for the site! (There's also a Facebook group if you're of that persuasion.)

With some colleagues, I've been helping to start a community archaeology project, including public education programs, improvements to the tourist infrastructure of the site, and interviews with local residents, tourists, and members of the project team. Our webreport has more detail. It's been fun thinking of ways to make the amazing archaeology of the site more accessible and interesting to people outside of the academy.

Posted by Dan at 12:34 AM No comments: Links to this post

Today the 2009 RAGBRAI bike ride begins. The seven-day ride will see some 15,000 cyclists cruise 472 miles across Iowa. This year, the Office of the State Archaeologist is sending a team - complete with custom 'Team Archaeology' jerseys.

Lynn Alex, at the state archaeologist's office, says members of Team Archaeology will also be pedaling along the entire 472-mile ride, talking to other riders and folks in the dozens of communities about the amazing sites nearby.

"One of the things we'll be telling people about are some 900-year-old earth lodge village sites that Native American people created," Alex says. "There are over 300 examples of those sites, particularly in Mills County, Iowa." In addition to the team of archaeologists riding on RAGBRAI, she says she and several other staff members will be setting up exhibits in about a half-dozen of the communities where the 15-thousand bikers will be overnighting.

You can follow Team Archaeology's ride on twitter: @iowaarchaeology. They also produced a nice educational booklet about archaeology to go with the ride. Props to the Iowa OSA for some creative thinking about public outreach!
Posted by Dan at 10:15 PM 1 comment: Links to this post 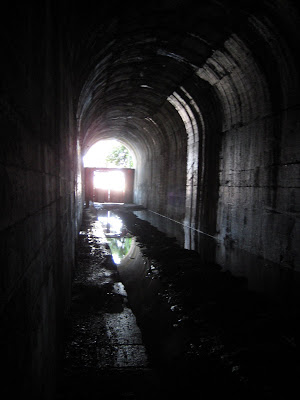 This old railroad tunnel is nestled under Fort Mason in San Francisco. Built in late 1914, it was the western extension of the old State Belt Railroad, connecting the Port of SF to the Presidio. The Panama-Pacific Exposition of 1915 was about to go down, and they needed a way to get the thousands of tons of building materials from the port over to the marina. It also made it much easier to ship military people and materiel into the Presidio.

There's not much left of the Belt Line now. You can still see some tracks in the pavement near the east side of the Fort Mason hill. The tunnel is most of what's left, and makes a fun short jaunt into San Francisco history. Some photos from a recent expedition with a friend of mine. 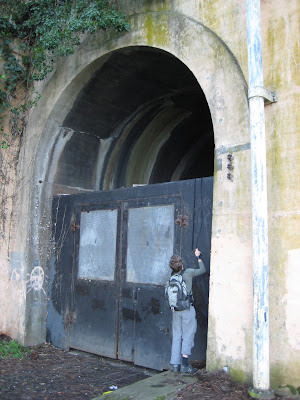 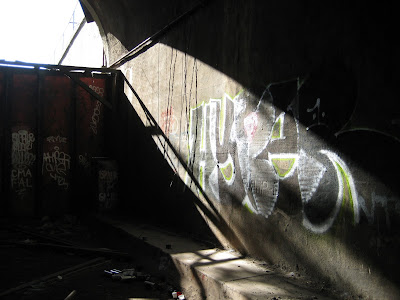 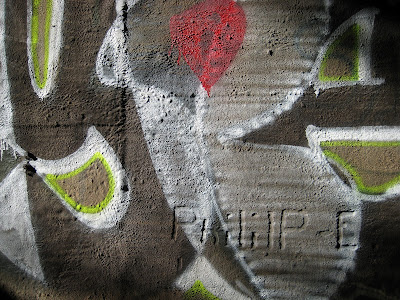 The west exit, near the Marina Safeway: 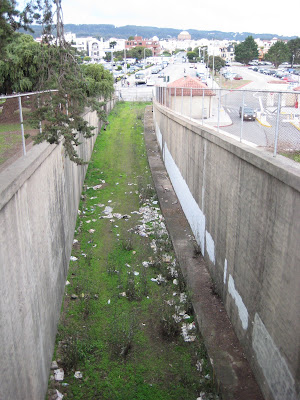 Posted by Dan at 11:28 PM No comments: Links to this post