The format of this blog notwithstanding, I love print magazines. So jumped at the invitation to do a regular Archaeopop column in PORK, the new lifestyle and fashion rag from GOBLINKO that's burning up the Pacific Northwest. Issue #2 is just out, with my article on how the remix is an old, old cultural form. I’ll republish it here eventually, but in the meantime get on the bandwagon and read it in PORK! You can get a paper copy in all these places or read it online here. The PORK blog is also a great source of weird and important cultural nuggets, check it out!
Posted by Dan at 6:59 AM No comments:

A Roman Shed in Berkshire

Tony in Berkshire has turned his garden shed into a Roman Folly. It was named 'Shed of the Year' in 2007! Once Tony got past the wife, he was able to give it appointments fit for an Emperor:


I remember admiring a ruined temple one year at the Chelsea Flower show in a garden-stone display. Following on from my interest in all things Roman, I was standing at the kitchen window one day some time later when I casually suggested to my wife that the shed might look better if it was converted to a Roman Temple. She was not amused! Three years passed during which time I produced a computer- simulated view of the garden with the proposed shed / Temple, and I continued to promote the idea at every opportunity. Then, on 23rd December 2004, I was at home when a parcel lorry arrived with my Christmas present, four (very big 2.2 metre) plastic/fibreglass Roman columns. I assumed this meant that I now had "Official Permission" to go ahead. Also featuring - Roman window bars / Amphora / Grape lights / Blue LED mood lighting / Alarm and CCTV / Roman cushions / Interior mural panels / Mosaic table / Two time zones (Britannia and Rome time). Future projects - statue of the Emperor.

Nice one Tony! See lots more pictures here. I got turned onto this amazing contest by Boing Boing's coverage of this American diner built in a Welsh shed.
Posted by Dan at 12:08 PM No comments:

Email ThisBlogThis!Share to TwitterShare to FacebookShare to Pinterest
Labels: DIY

Lewis Binford, one of the giants of 20th century archaeology, died earlier this month at the age of 79. He was among the leaders of the 1960s New (or 'Processual') Archaeology, which took the discipline from its culture-history roots into the thickets of scientific explanation. It's impossible to underestimate his impact on ethnoarchaeology, archaeological theory, and the study of the palaeolithic. He got his PhD at Michigan, where, as Wikipedia notes


he saw a sharp contrast between the "excitement" of the anthropology department's cultural anthropologists (which included Leslie White) and the "people in white coats counting their potsherds" in the Kelsey Museum.

As an alum of the Classical Archaeology PhD program based in the Kelsey I'm duly amused/outraged! (Though I think the potsherds were all counted by the time I got there.)
Obituaries in the New York Times and the Wall Street Journal, but the best I've seen is this one by Laurence Guy Straus (via John Hawks).
Posted by Dan at 11:56 AM No comments:

SEAN turned me on to this tight and super Archaeopop video. Sean sez:

Love it. This song has incredibly serious Belgian girls with frizzed-out hair and day-glo t-shirts doing their "martial-looking dance moves"  in a gallery of Classical sculpture, while the singer guy does jerky crazy dances and fondles the statues. Best three minutes of my day, almost.

This video could make a great class game for Greek Art 101: spot the famous sculptures in this video! I see the Laocoon, how about you?!
Posted by Dan at 10:29 PM 2 comments:

Bert and Ernie in 'Caveman Days'

Look both ways before you cross the street or you will get STOMPED BY A DINOSAUR!
Posted by Dan at 2:34 AM 1 comment:

OMG I love my Facebook feed sometimes.
Posted by Dan at 9:48 PM No comments:

If archaeology is a brand, Zahi Hawass is a master marketer. Egypt's Minister of Antiquities Affairs has taken a page from Bono's book and launched a 'adventurous' fashion line named after... himself. Designed by Lora Flaugh of branding firm Art Zulu, ZAHI HAWASS will have a shop at Harrod's sometime later this year. The press release is hilarious:


ZAHI HAWASS is a novel fashion line not just for the traveling man, but the man who values self-discovery, historicism and adventure. Rich khakis, deep blues and soft, weathered leathers give off a look that hearkens back to Egypt’s golden age of discovery in the early 20th century. Natural dyes, vegetable dyes and organic cottons were thoroughly researched to come up with the most premium and environmentally friendly fabrics for the versatile shirting, shorts and pants that comprise the collection. Ample time was spent developing the hardware and finery to make it feel extraordinary.

The ZAHI HAWASS vision can only be fully realized in an environment that matches the grandeur and classicism of Egypt. Combined with an elegantly themed in-store shop at Harrods, ZAHI HAWASS clothing will promote a look that is both trendy and casual, conservative and cool. More than anything else, the proposed ZAHI HAWASS collection and shop will be a retail experience that evokes the beauty of Egypt through its décor, and invites consumers to pack their suitcases and journey to the exotic locale.


I strongly recommend Zahi Hawass leave our antiquities alone, and stick to his “eponymous menswear line.”

Heritage Lists for the Internet Age?

This week celebrated the 42nd anniversary of the first ARPANET message (which was 'the birth of the internet', depending on how you keep score). UCLA is planning to restore the room where it happened - 3420 Boelter Hall - to its 1969 vintage appearance and open the space to the public as the Kleinrock Internet Heritage Site and Archive. Leonard Kleinrock was the guy that pressed 'send' on that first message (though he himself is humble enough to acknowledge that the net has many fathers and mothers). It's a cool idea. Or is it? I'm not sure yet.

Anytime there's a big historical transformation, our culture has to pick which events to remember as milestone, and figure out how to turn it into 'heritage' (by which I mean the 'official selection' of historically important places and things). The internet generation saw nerd culture rise to dominate and transform our world, which poses some odd problems for making a list of 'heritage' that needs 'protection'.

First of all, nerd spaces look like crap! They're not monumental or even especially pretty. I mean, any third-rate European castle with absolutely no historical relevance looks way better than any of the places from where the nerds have unleashed a new civilization. To demonstrate, a tour of some potential 'heritage sites' for the digital age:

Here's Mark Zuckerberg in the early days of Facebook, surrounded by garbage and flipping the bird in his squalid Harvard dorm room: 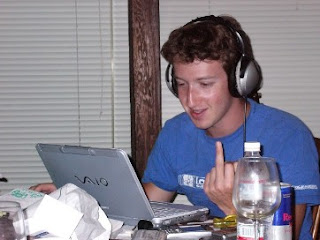 Here's the cubicle at PayPal where YouTube got started after hours:

I want to puke just looking at these pictures. Ranch houses, dorm rooms, and cubicles: these are the paragons of American architectural mediocrity that launched a billion facebook stalkers, iphone obsessives, and cute kitten videos. But places are important, so I'm gonna calm the gag reflex and think about them. They're all modest, closed in, unremarkable, normal spaces. No surprises. Almost every American has been to one of these.

These 'heritage' places of the internet age say nothing, not power, not wealth, not authority. They were the nondescript vessels of something transformative, mute witnesses of events that their architectural surroundings were never intended to facilitate - events that their architects could not even have comprehended. Even the lamest, most irrelevant medieval castle in Europe has these places beat hands down for architectural drama.

But something different is going down here, too - the difference between the cubicle and the castle is that it's a moment of invention that's being fetishized, rather than an aesthetic system or social class. Most monuments on the World Heritage List were built to sustain these kind of ideas, in an effort to make power grabs seem like something permanent. Here's where the 'heritage' model gets kind of warped and twisted:  the moments and places where something new is launched are usually pretty run down and uninspiring compared to the events that take place there. Finding a fit setting for the great stories of history is something else entirely.

UNESCO, in fact, has some ideas about preserving Internet Heritage, though a lot of it involved vapid comments like "digital heritage is likely to become more important and more widespread over time". Duh. But they're mostly talking about media, the portable stuff - not the monuments. When will the great centers of computer innovation get on the World Heritage List? Or is the strangeness of that question are an argument that the monument is dead as a cultural form?
Posted by Dan at 10:34 PM 3 comments:

Al Ahram online reports that the Ministry of State for Antiquities Affairs - with Zahi Hawass back in charge - will now begin accepting complaints:


Zahi  Hawass, Egypt’s minister of state for antiquities affairs [MSAA], said that the administration will look into and review all complaints and suggestions to develop the MSAA. Archaeologist, Magdi El-Ghandour, director of the archaeological documentation centre, will lead these efforts.

Hawass promised that each complaint will receive a reply within a week.

It's a new era in Egypt! I'm interested to see what in practice comes out of the reorganization of the Ministry (itself established only a few months before the Egyptian revolution).
Posted by Dan at 11:35 AM No comments:

Florida's Everglades, a huge wetland in the southern part of the state, are dotted with small 'tree islands' that stand slightly above the wetlands, allowing trees and shrubs to grow. These islands provide a dry refuge for birds, alligators, and small mammals and are an integral part of the biodiversity found in the Everglades region.
But these 'tree islands' are actually... trash piles. (Or middens, as archaeologists say). Under the trees and layers of calcium deposit, archaeologists have found ancient trash pits made up of bones, broken pots, discarded tools, and other waste. About 5,000 years ago the Everglades were more a grassland than a wetland, and easier for people to live in. As the water table rose over the centuries, people used the land less but the trash piles they left provided dry places for trees and shrubs that were being forced out by the rising water. Read the article at New Scientist, or the press release from the American Geophysical Union.

What super cool news. Archaeopop has explored nature, culture, and climate change a bit recently (see here and here). This news from Florida is more evidence that human activities that are good for biodiversity if they're done right - and that the distinction between nature and culture is an illusion that does us more harm than good. The real environmental question is not 'why are people so evil to the earth?' but 'what kind of human activities are good for biodiversity, and how do we structure our economies to make it happen?'
Posted by Dan at 1:35 PM No comments:

THIS is what I'm talking about for history education: sex, violence and swearing. Start there and see if the kids are still bpred. Posters from a noncommercial project by Jenny Burrows (design) and Matt Kapler (copy). Burrows originally used the Smithsonian's logo, but the museum was upset about the cool, free advertising and demanded they change it. Wimps.

Genghis Khan and Teddy Roosevelt after the jump.