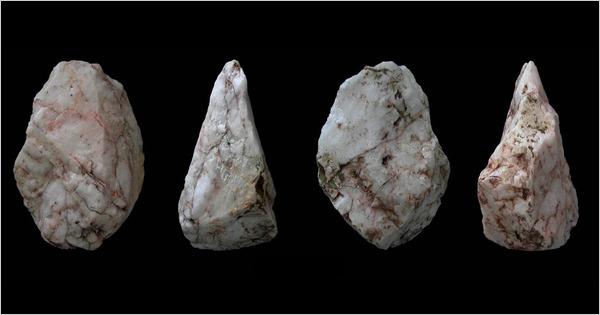 They found these on Crete. That's big news, because they're old. Like Palaeolithic old. 130,000 years old? 700,000 years old? No one's sure yet, but certainly is much older than any artefact on Crete is supposed to be. Why's that? Because Crete is an island, and has been for 5 million years. That means for people to have got there, they had to have been travelling long distances by boat a long, long time before anyone thought it was possible.

The evidence is from the Plakias Survey, led by Eleni Panagopoulou (Ephoreia of Palaeoanthropology and Speleology) and Thomas Strasser (Providence College), presented at the Archaeological Institute of America meetings last month in Anaheim. It's not just scraps, either - the survey found over 2,000 Mesolithic and Lower Palaeolithic stone tools, and backed it up with research on the geological deposits in which they were found. The terminus ante quem is 130,000 years BP, though they could be much older.

So people came to Crete. Or were they people? Anatomically modern Homo Sapiens didn't evolve until about 200,000 years BP, and didn't make it to Europe until about 50,000 BP. Moreover, these look a lot like Achulean tools, which are associated with Homo Erectus. As John Noble Wilford writes in today's New York Times:

But archaeologists and experts on early nautical history said the discovery appeared to show that these surprisingly ancient mariners had craft sturdier and more reliable than rafts. They also must have had the cognitive ability to conceive and carry out repeated water crossing over great distances in order to establish sustainable populations producing an abundance of stone artifacts.

I wrote last week about "archaeological optimism", the idea that people in the past were much more capable than we moderns give them credit for.* As the quote above shows, the idea that our ancestors were stupid and uncreative - proverbial cavemen and cavewomen - runs deep and dies hard. In this case it may have been our cousins in the Homo Erectus and Homo Heidelbergensis families who deserve the props for sailing to Crete (from Anatolia? Libya? Greece? It was blue water, with no land in sight). Cognitive ability? Are you serious? No one bats an eyelash at the idea of Homo Erectus traveling 10,000 km from Africa to freaking Southeast Asia across mountains and rivers and deserts and tiger-infested jungles and whatnot - but it's shocking that they could build boats and hop 50km from the Peloponnesos to Crete?

To answer my rhetorical question above: duh, of course Homo Erectus and Homo Heidelbergensis and Homo whatever-whatever were people. They were badasses who colonized a whole world and figured out how to live in the harshest environments using nothing but stone, wood, and their wits. It's awesome, and we should send out love and respect to these people whether they were our direct ancestors or not.**

Thomas Strasser and Curtis Runnels are giving a lecture about the findings in Providence, RI on April 7 (details to be announced on the ACSCA website at some point). In the meantime, enjoy this topical music video based on a premiere archaeological film.


* Yes, I'm now feeling self-satisfied.
** And can we get some names for the cousins on the family tree that sound less perverted and/or German?