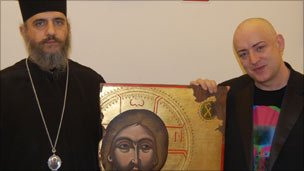 When Boy George learned his juicy 18th century icon of Christ had been looted from a church in Cyprus, he did the right thing, as the AP reported yesterday:

Boy George agreed to return the 18th century icon he bought from a London art dealer in 1985 after being presented with proof of its true origin, the church said in a statement posted on its Web site.

Boy George, who said he was unaware of the icon's history when he bought it, personally handed the icon over to Bishop Porfyrios in London on Tuesday. In return, the bishop gave him a modern icon of Christ as a token of gratitude and "with the wish that others soon follow his example."

The leader of the Cyprus church, Archbishop Chrysostomos II, lauded the singer for doing the right thing.

"The moment he heard that the icon was stolen, I think that he did right to return it to the Church of Cyprus to which it belongs," the archbishop said. "We thank him and if he ever comes to Cyprus, we will certainly welcome him."

The church statement said Boy George expressed hope that the icon would soon be returned to the church of Saint Charalambos in the village of Neo Chorio Kythreas from where it was taken. The icon is now in Brussels and will return to the island later.

Good for George. The photo of this odd couple on either side of Jesus is fantastic!

Kythreas is in northern (Turkish) Cyprus, northeast of Nicosia. Since the 1974 military coup, Turkish invasion and civil war, the northern (Turkish) part of the island has seen systematic looting of its heritage, especially of Christian religious icons and frescos. Though even the Greek Cypriot government acknowledges that looting is problem on the whole island, the northern Cypriots should be ashamed that they've done such a poor job of protecting the Christian heritage of the region.

Boy George, of course, should also be ashamed of himself for buying looted art. London is one of the world's major centers for the trafficking of stolen art and antiquities, and even in 1985 there was enough information available for the savvy buyer to understand that most antiquities on the market were illicit. Nowadays, anyone who buys such a thing is simply colluding in the theft.