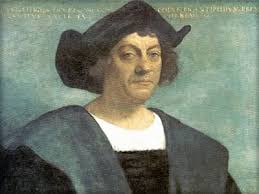 Christopher Columbus was a pirate, from a family of pirates. I became persuaded of this when I was nosing around Surprised by Time. Diana Gillibrand Wright shares the following story penned by Christopher Columbus’ son about the seizure of a Venetian convoy in late August 1485 by a pirate named Columbo, then working for Charles VIII of France:

The first cause of the Admiral's [Columbus] coming to Spain and devoting himself to the sea was a renowned man of his name and family, called Colombo [Nicolò Griego], who won great fame on the sea because he warred so fiercely against infidels and the enemies of his country that his name was used to frighten children in their cradles. . . . on one occasion he captured four large Venetian galleys of such great size and armament that they had to be seen to be believed. . . . . While the Admiral was sailing in the company of the said Colombo the Younger (which he did for a long time), it was learned that those four great Venetian galleys aforesaid were returning from Flanders. Accordingly Colombo went out to meet those ships and found them between Lisbon and Cape St. Vincent, which is in Portugal. Here they came to blows, fighting with great fury and approaching each other until the ships grappled and the men crossed from boat to boat, killing and wounding each other without mercy, using not only hand arms but also fire pots and other devices.

Columbus escaped from a burning ship and swam to shore. The goods turned up and were sold in England. The losses to Venice were huge and spelled potential bankruptcy for the Republic, which spent years of diplomacy trying to claw back its property (with some success).

The traditional story of Columbus was that he was a humble wool-weaver's son, who by various strokes of luck was shipwrecked in Spain, married a wealthy aristocrat, and persuaded the crown to send him to America. But what was Columbus doing on the crew of a pirate ship, and how was he related to the Captain? Commenter Pavlos, in two elegant posts, puts the myth of the wool-weaver to bed and places Columbus into a much more plausible context:

Historians and writers dealing with those mysteries [of Columbus' origin] usually tend to follow one of two trends. The most serious ones have attempted to mould Columbus into a recorded, verifiable individual; to make him fit the evidence rather than match him to it. The others to give him a passport that is non-Genoese by making points that are usually either weak or outright laughable. Both have created a kind of mythology.

Because it is a myth that Columbus was born in 1451, that he was a wool-weaver’s son, a deck-hand on a ship from Genoa or Burgundy who survived an attack by French corsairs and settled in Portugal in 1476 and many other “facts”.
We simply do not know when he was born. We don’t know what name he was given at birth or whether he had a surname before settling in Portugal – let alone what it was. So rather than dispute what he said about himself and what his two contemporary biographers – his son Fernando Colon and Bartolome de las Casas – wrote, let us see what picture emerges and if it makes sense.

Columbus was Genoese. Because that is what he said himself and that is what everyone else who knew him said. The only Cristoforo Colombo in Genoese archives that bears some similarities to Columbus is a wool-weaver’s son who is believed to have been born around 1451. But they don’t have to be the same person. Columbus may not have been called Cristoforo Colombo when living in Genoa; or may not have lived there at all. There were thousands of Genoese citizens borne and brought up in Constantinople, Chios, the Black Sea coast, and all over the Mediterranean.

Columbus said he came from a seafaring family and went to sea at fourteen. This is outright dismissed by some because it does not fit the wool-weaver theory. He also said he was contracted by “le bon roi Rene”, titular king of Naples, to capture a ship called Fernandina. We have no idea when this is supposed to have happened but the 1460s or early 1470s are thought the most likely time. This story is often called fanciful, as it does not fit in with the young wool-weaver theory and as an alternative it is suggested he may have been a simple deck-hand in that enterprise.

At some point Columbus settled in Portugal. It is almost certain it was in the 1470s but we don’t know exactly when. The year 1476 is often given. It was the year a combined Franco-Portuguese fleet attacked a Genoese convoy off the cape of St Vincent in Portugal. The leader of the corsairs was a man known as Colombo the Elder, a vice-admiral of the kingdom of France, who is otherwise known as Guillaume de Casenove. With him was his successor, Colombo the Younger, also known a Georges Paleologue de Bissipat. Many were killed and several ships from both sides caught fire and sank. Many historians, based on what Fernando Colon wrote, believe Columbus took part in that battle and, after managing to swim to safety, settled in Portugal. But they place Columbus on the Genoese ships, or on a ship from Burgunty that was with them, as a simple deck-hand, because that fits with the young wool-weaver theory again. By a coincidence that can only be described as diabolical or divine by the proponents of that theory, his brother Bartholomeo was already established in Portugal as a cartographer.

This vision of the complicated, ethnically ambiguous world of 15th-century Mediterranean seafaring rings true to me. Christopher Columbus, born to a polyglot family of corsairs from the Italian diaspora of the day, was from his youth a practitioner of the incessant economic warfare between Mediterranean powers. Pirate clans such as his were independent contractors operating under royal licenses to pillage their enemies. Rather than simple cruelty, piracy of this kind was a calculated combination of warfare and economic activity: a cheap way to bolster royal coffers while terrifying your enemies.

For me, Columbus’ approach to America epitomizes this approach, and made him perfectly suited to the task. Neither Wright nor Pavlos mention is the evidence of his later career, but his journeys to America were a pirate mission in the sense above: intended to explore economic opportunities, by force if the opportunity struck. On landing on Hispaniola, his first thought was to seize as much gold as possible, and his second thought was to seize slaves. Slavery was a common fate for people seized by pirates in the early modern Mediterranean, and was a major source of income for their captors. In his letter to their Most Catholic Majesties in 1493, Columbus averred,

It is possible, with the name of the Holy Trinity, to sell all the slaves which it is possible to sell...Here there are so many of these slaves, and also brazilwood, that although they are living things they are as good as gold...

But this cruelty was not purely directed toward the Indians. As Viceroy of the Indies, Columbus and his brother were such harsh rulers to the Spanish settlers that they ended up being sent back to Spain in chains as an embarrassment to the government:

As governor and viceroy of the Indies, Columbus imposed iron discipline on the first Spanish colony in the Americas, in what is now the Caribbean country of Dominican Republic. Punishments included cutting off people's ears and noses, parading women naked through the streets and selling them into slavery.

Columbus' government was characterised by a form of tyranny," Consuelo Varela, a Spanish historian who has seen the document, told journalists. One man caught stealing corn had his nose and ears cut off, was placed in shackles and was then auctioned off as a slave. A woman who dared to suggest that Columbus was of lowly birth was punished by his brother Bartolomé, who had also travelled to the Caribbean. She was stripped naked and paraded around the colony on the back of a mule.

Bartolomé ordered that her tongue be cut out," said Ms Varela. "Christopher congratulated him for defending the family."

Further grim detail is easy enough to find, and hopefully you’ve read some of them before: Columbus’ men chopping the hands off of natives who did not meet their gold quotas (there is, of course, no natural gold on Hispaniola), mass enslavements, the extermination of millions of people from violence and disease, the sale of girls as young as nine or ten as sex slaves, the story of Columbus personally whipping and raping a woman on the deck of his ship. It is the work of a pirate written on a much larger canvas – and reinforces, in a grim way, how much the cruelty and strife of the late-medieval Mediterranean provided the models for the settlement of the new world.

Extracts from Columbus' 1492 diaries
Bartolomé de las Casas' Account of the Destruction of the Indies
Some more Columbian atrocities
John Noble Wilford, The Mysterious History of Columbus
Posted by Dan at 12:00 PM