Coup Against Culture in Honduras

In the wake of the military takeover in Honduras, the coup plotters are demonstrating that their concerns are not purely constitutional. The newly-installed Minister of Culture, Congresswoman Myrna Castro, is a former television host known for her opposition to culture, arts, and archival programs and allegedly (I couldn’t find a reliable source for this) an advocate of burning “undesirable” books. 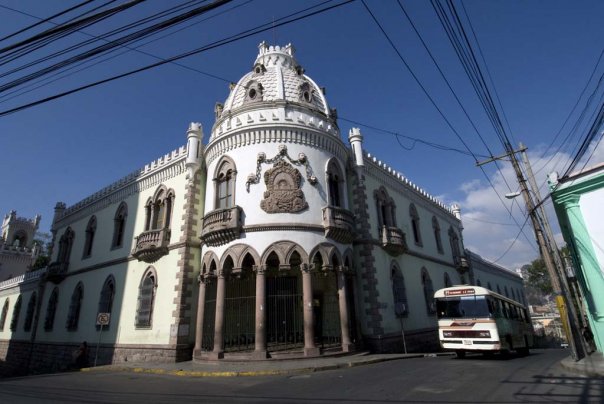 The Old Presidential Palace, now home to the National Archives of Honduras (quotha.net).

With her predecessor, Rodolfo Pastor Fasquelle, in exile in Mexico, Castro’s first few acts as Honduran Minister of Culture have been startling to say the least. She immediately canceled the nationwide literacy campaign (Honduras has one of the lowest literacy rates in the Americas). On Sunday August 2, accompanied by soldiers, she appeared at the Centro Documental de Investigaciones Históricas de Honduras (CDIHH) and announced its conversion into a barracks for army reserve units. The CDIHH is the home of the National Archives and the Ethnohistoric Archives (where the nation’s archaeological collections are stored).

The political point being made here is so unsubtle that it takes on an air of magical realism! As the director of the Honduran Institute of Anthropology and History points out, the building itself is cultural patrimony, and is protected by the 1954 Hague Convention for the Protection of Cultural Properties in case of Armed Conflict.

As a result of the military occupation, a lot of the center’s activities have been cancelled:

One of the center’s (CDIHH) principal objectives is to serve as a space for the diffusion of culture and national heritage by developing seminars, symposiums, book presentations, conversations, temporary expositions, and artistic events, among other things, which were canceled by the military on the express orders of the Minister.

It’s no particular secret that Zelaya’s government was populist, and was interested in redistributing wealth from the large landowners who have long dominated Honduran politics (and have a history of suppressing indigenous culture). While the coup plotters have won a sympathetic hearing from some of the world press for ‘defending the constitution’ of Honduras, it is clear that at least some of their agenda involves rolling back efforts to promote awareness of art, history, and literature among a broader spectrum of the Honduran people, many of whom are members of Indigenous groups.

On taking office, Castro immediately dismissed two key figures in the Ministry of Culture. Natali Roque Sandoval, the head of the National Archives, was accused of a series of crimes. (Amusingly, Roque Sandoval discovered in her archival research that Roberto Michelleti [the current president, installed in the June 2009 coup] had been involved in trying to unconstitutionally extend the term of a former president, back in 1985 – the exact crime which the military used as its pretext for removing Manuel Zelaya from the presidency.)

Also dismissed was Rebeca Becerra, Director General of the Book and the Document in the Secretariat of Culture. Becerra, a recognized Honduran poet, was known for her work in digitalizing the archives and modernizing collections management. Besides that, she was responsible for organizing over 20 new public libraries, opening printing presses, and subsidizing artists. On her removal, she was charged with a series of crimes (against which she defends herself here).

For the army to occupy the national archives is a terrifying and Orwellian gesture. I feel a dull anger in the pit of my stomach when I think about it. I had hoped that the era of military dictatorship, where generals erased people and history with impunity, was over in our hemisphere. And I find it odious that Central American reactionaries still react with venom when anyone tries to educate indigenous people or campesinos.

But there’s also an ironic validation in the gesture. If the army is so terrified of history, archaeology, and literature, then it means that it has power. Historical archives, ethnographic collections, even old newspapers are given the status of an rebel force, which must be defeated and its base occupied. I can't help but envision the Directorate of the Book, the Ethnohistoric Archives, the and the historical periodicals section as rebels behind the barricade, heroes under occupation, martyrs for the republic. Strangely, the army seems to be endorsing the Marxist view that knowledge of history is a tool for political struggle, and culture a weapon to fight oppression - far from an irrelevant distraction for idle youth. It's a nice reminder to culture workers that our work can be dangerous in all the right ways.

I’m keeping my eye out for petitions or letter writing campaigns that readers can participate in. I’ll update as necessary.

I believe this is Minister Castro's Facebook page, if you care to send her a message.
Posted by Dan at 5:05 AM