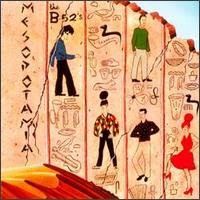 From the EP of the same name, released in 1982 and produced by David Byrne. Peaked at #35 in the Billboard 200. Perhaps the only pop song dropping references to the Code of Hammurabi? Not sure what the pyramids and hieroglyphics are doing here though.

A live version from 1990 with excellent arm-swinging-dancing from Cindy:


This song has a trendy afterlife: Last year Diplo threw it on his Top Ranking Santogold mix, which was the soundtrack to my life back in August. (Download it free at Music Like Dirt). Lupe Fiasco also uses some bits of 'Mesopotamia' on 'He Say She Say' (off of Food and Liquor).
Posted by Dan at 3:50 PM