The Pleasure of Ruins in Chongyecheon, Seoul

Some weeks ago, The Vigorous North posted this scarcely believable article about a river in the center of Seoul. Once covered by two 10-lane freeway decks, it has now been daylighted and turned into a delightful urban park. (The mayor who made this happen either has giant political cojones, or automotive politics is quite different in Korea.)

However, traces of the highway were left standing in the middle of the new park, as a reminder of the past: 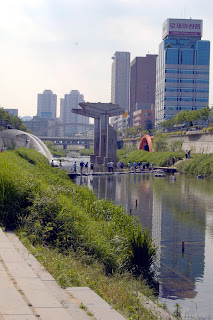 (Ben Harris-Roxas)
This gesture has such a delicate aesthetic. The pillars of the former freeway remind us of the past in the midst of a radical change in the urban landscape. It takes restraint to leave traces of an undesirable past for future generations. I think they achieved a nice balance here.

I can't imagine such a thing happening in the United States. Most green-minded folks carry around a lot of guilt and self-righteousness about the freeways that are the signature monuments of our civilization, and would gleefully eradicate them without a backward glance.

The whole project raises some interesting questions about authenticity, archaeology, and place. When you daylight a historic river like the Chongyecheon, is it still the same stream in an existential sense? Are the ruined pillars of the highway archaeological monuments? The architects chose the shape and location of ruins, but they are still physical evidence of past land uses. They sit in a fascinating grey area between the archaeological site and the architectural folly.
Posted by Dan at 11:11 PM